The legislative environment in Washington has intensified as the Trump Administration moves past its 100th day in office. On May 4, 2017, the House passed the American Health Care Act by vote of 217-213. If passed by the Senate, it could bring up to $1 trillion in baseline revenue, which would act as a partial offset to reducing the corporate tax rate. Overcoming this legislative hurdle, even if the legislation fails to advance in the Senate, creates new momentum in the House to tackle tax reform legislation.

In the tax reform debate, attention shifted to the Administration on April 26th after the White House released its “Core Principles” for tax reform. National Economic Council Director, Gary Cohn and Treasury Secretary, Steven Mnuchin, highlighted an aggressive cut to corporate and individual tax rates to encourage growth. Beyond “Eliminat(ing) tax breaks for special interests,” the document provides few details about how the Administration would pay for its proposed rate cuts and is silent about how it would treat specific community development credits. The text of the White House document can be found at: http://www.marketwatch.com/story/full-text-of-trump-administration-tax-reform-principles-2017-04-26

In the House and Senate, tax reform remains a critical priority. The Ways and Means Committee is continuing its lead role in developing legislative language for a tax reform bill. In late April, Republican members of the Committee participated in a retreat to find common ground on several outstanding questions that must be resolved before tax legislation moves forward. Despite calls for greater leadership by the Senate to move the tax reform process forward and strong opposition by some Republican Senators to a House-devised Border Adjustment Tax, there has been little indication the Finance Committee is working quickly to assemble its own version of comprehensive tax reform.

The Administration’s engagement presents an important opportunity to advocate for the Historic Tax Credit with the House, Senate, and the Administration. Now is the time for stakeholders to engage and make the case for the HTC with Congress and the Administration. The future of the credit in tax reform will depend on the ability of advocates, both in DC and at home, to share the value and need for this economic development incentive. Please make plans to engage your member of congress on behalf of the HTC.

HTC industry advocates and preservation organizations arranged the following in-district meetings or tours during the April:

If you would like to report recent or future meeting/site visits with a Member of Congress or staff, on behalf of the HTC, please email Mike Phillips at mphillips@ntcic.com. 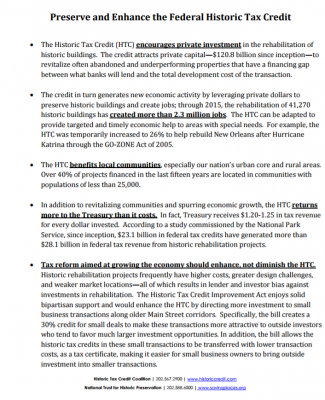